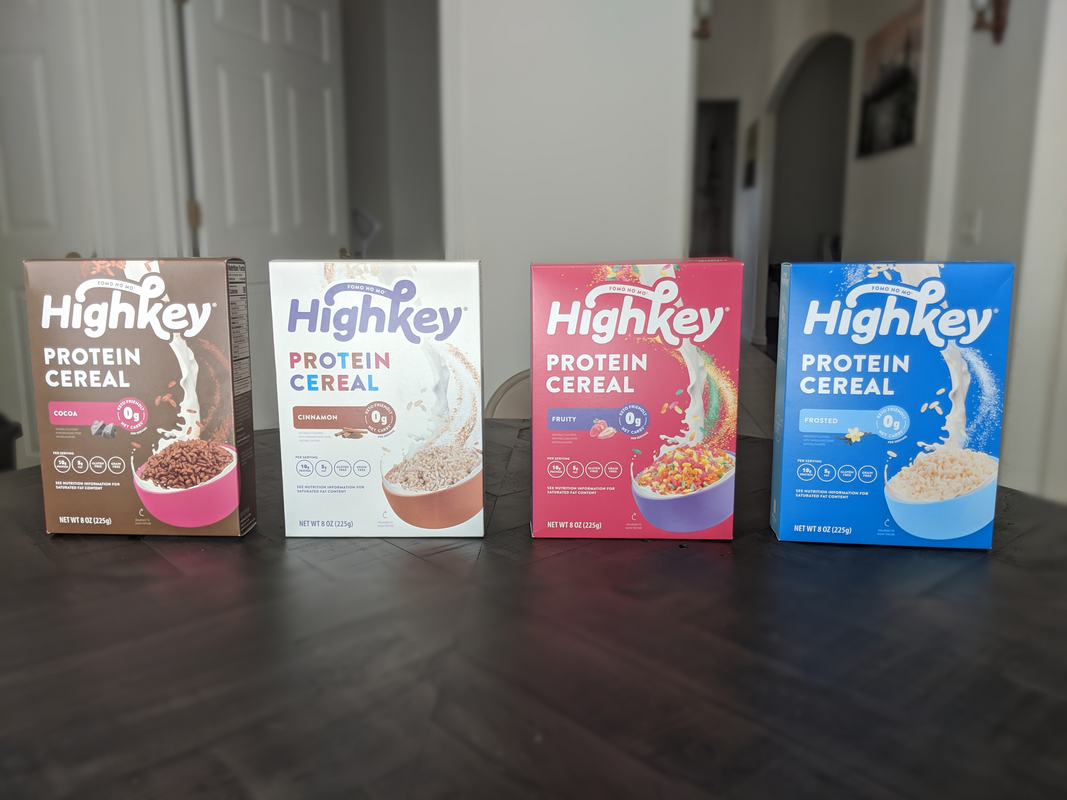 Highkey Cereal is a game changer.

As mentioned in my Schoolyard snacks review, cereal was a part of my morning routine as a child. My family always purchased cereal in large bags because it was a cheap option and preferable to expensive breakfasts. The problem with these cheap cereals are their nutritional contents. Most of all cereals that exist on the shelves today are heavily processed and contain large amounts of sugar.

Highkey Cereal to the rescue. Highkey Cereal is among a few other companies shaping the cereal industry to include more healthy and keto-friendly alternatives. Since users rated Highkey Cereal higher than its competitors, I ordered all four flavors available on Amazon: Cocoa, Fruity, Frosted and Cinnamon. Let me tell you, I was not disappointed. 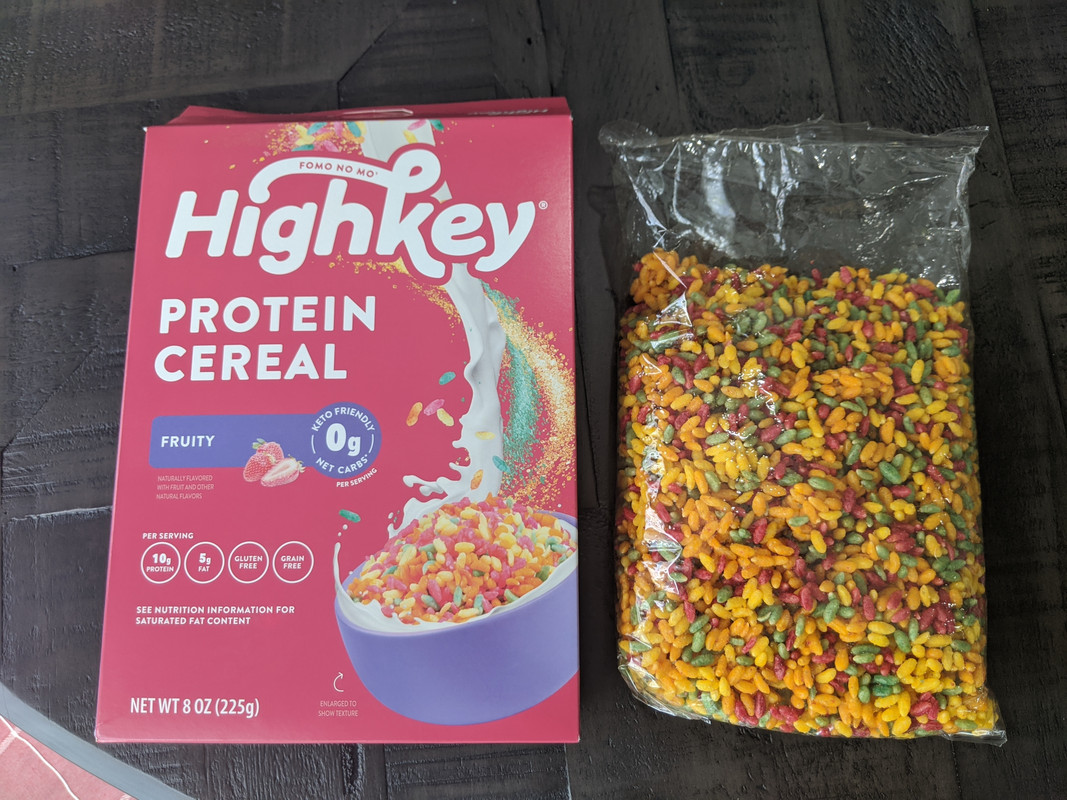 All boxes contain around 4 cups of cereal each. They stick and clump together while they are dry and in the bag, so there is more than what it looks like in the picture. That said, this is still less than its unhealthy competitors: the box is smaller than the classic cereal box as you can see below. 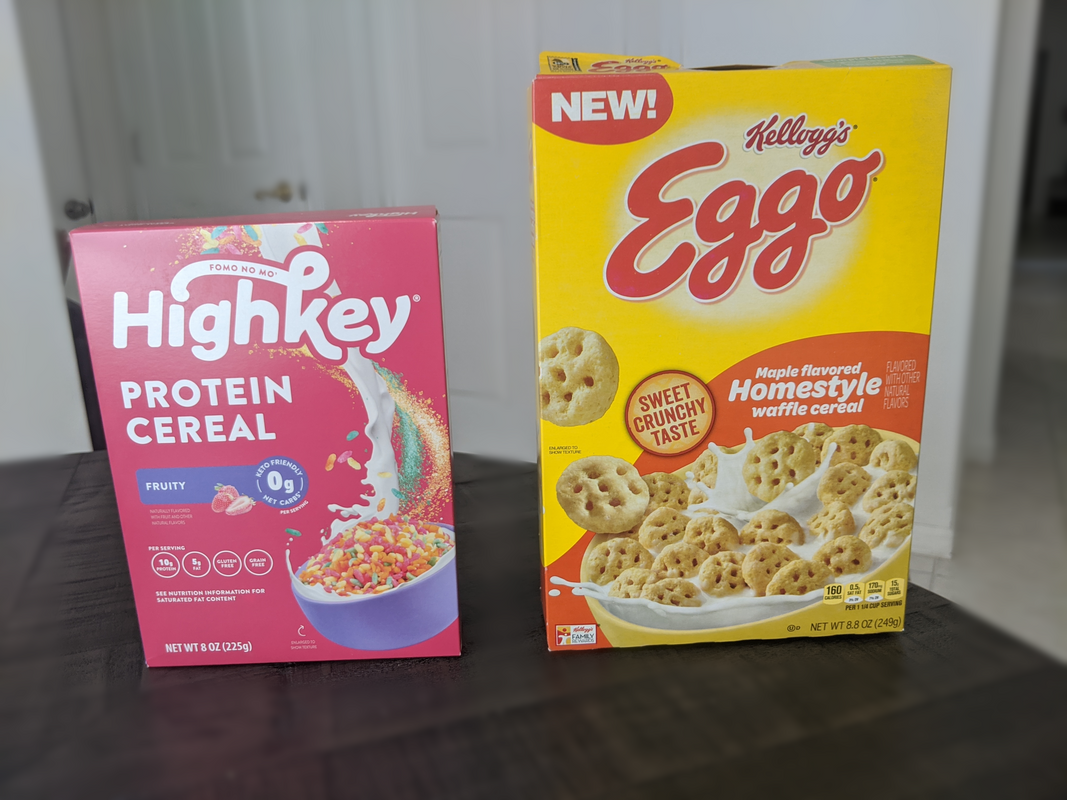 3 of 4 of these cereals I would buy again; and I am very picky about my pricey keto alternative foods. While each cereal has its own flavor, there are two things that seemed consistent across each: high sweetness and crunchiness. The cereal is very sweet, probably because it is sweetened with allulose. The crunchy texture is something I enjoyed in the cereals; it isn't the overly dry texture you get with the popular cereal brands. 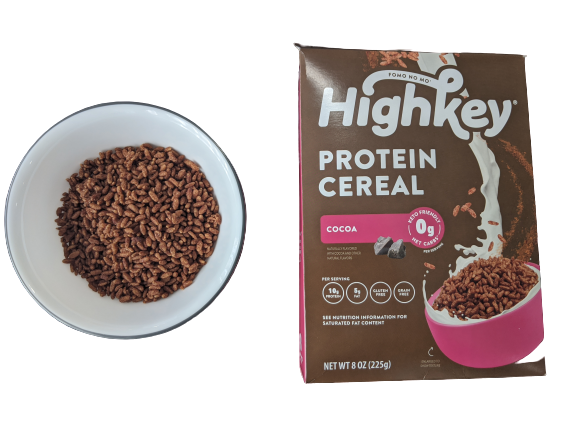 Wow! The cocoa flavor surprised me, especially after the terrible experience I had with Schoolyard Snacks' cocoa flavor. At first taste with some unsweetened almond milk, the flavor was on par with Cocoa Pebbles. My little cousin actually found their cocoa flavor to be better than Cocoa Pebbles. This is likely because of the stronger sweet taste these cereals have. 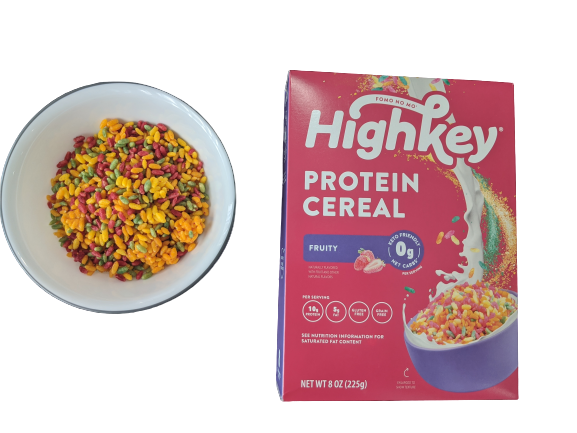 The Fruity flavor instantly transformed my milk into a sweet, fruity-tasting pink goodness. I love this cereal, but since my taste testers did not like it as much as me, I moved it down to #3. Some of my testers said that the sweetness was far too strong with this cereal in comparison with the others. 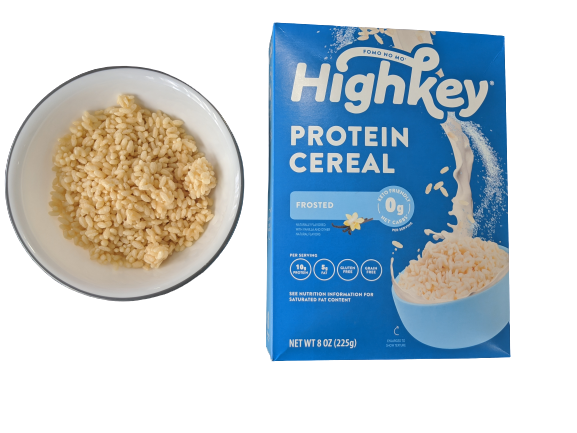 A step down from the others. My taste testers and I collectively agreed this cereal was the least favorite of the bunch. Not that it's not good, it just wasn't as good as the other cereals. I could taste some protein occasionally in this flavor, but when I didn't it taste like a vanilla cookie. That said, I still prefer this over Schoolyard Snacks' Peanut Butter and I am a peanut butter lover.

Schoolyard Snacks has the edge in terms of protein per calorie ratio. 1.6 grams of protein per 10 calories versus 1.1 grams to 10 calories. This is a notable difference if your cereal is an important aspect of your protein intake. That said, I think 6 grams is an easy amount of protein to make up and it is well worth eating cereal that tastes better.

After some time analyzing and researching each ingredient, I determined that Highkey Protein Cereals have clean ingredients. Here is a list and my analysis for each ingredient in the cereals.

Approximately 80% casein protein and 20% whey protein. Milk Protein Isolate has a complete amino acid profile for muscle recovery. This type of protein is in fresh milk, there is just no lactose.

A sweetener that contains nearly no calories that tastes like our common refined sugar. It does not spike blood sugar and possibly reduces risk of heart disease. Human studies show little side effects other than minor digestive issues in some people at larger doses.

A type of soluble fiber that's found naturally in lots of our foods and plants such as garlic and onions. Inulin keeps you full, promotes digestive health and controls your blood sugar levels; all of which are great for any dieter.

Fats found in foods such as butter or coconut oil that are metabolized differently than other common types of fats. These types of fats get processed directly by the liver where they are turned into ketones or used as an instant energy source. Studies find that MCT's increase the body's ability to burn fat and contain a fewer calories than LCT's (common) fats.

The new sweetener on the block. This is a rare monosaccharide sweetener that's naturally found in wheat, figs and raisins. Allulose is 1/10 the calories of sugar, and there have been promising studies that are suggesting effects such as lower glucose and fat loss. There still needs to be more long-term studies on this sweetener, but scienfically speaking from the studies we have, this is a top choice compared to the alternatives.

An emulsifier that is sourced from hydrated sunflower gum. Sunflower Lecithin studies show that it can lower cholesterol levels and improve digestive health.

A zero-calorie sweetener which, unlike most sweeteners, gets its sweetness from mogosides (antioxidants). It is made by pulverizing seeds from monk fruit into juice that gets dried into a powder.

A zero-calorie sweetener which, unlike most sweeteners, gets its sweetness from mogosides (antioxidants). It is made by pulverizing seeds from monk fruit into juice that gets dried into a powder.

Flavors that have been extracted from an animal or plant which can include a large array of sources. Quoting the FDA, this can be a spice, fruit or fruit juice, vegetable or vegetable juice, edible yeast, herb, bark, bud, root, leaf or similar plant material, meat, fish, poultry, eggs, dairy products, or fermantation products thereof. Basically, we cannot tell just from reading the label what is in this.