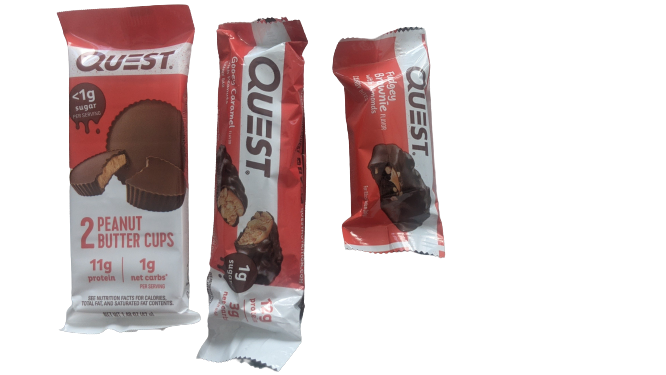 Quest has really gone out of their way lately to create some innovative types of food and snacks for healthy eaters to enjoy. The question we must always ask is, what is healthy and what is bad for us? Today, I've received some of the latest snacks by Quest: Peanut Butter Cups, Gooey Caramel with Peanuts and Fudgey Brownie. I want to focus on each of these bars: how they taste, what's inside of them and if they are worthy to be a part of a nutritious diet.

Quest as a company as of late has been primarily focused on creating foods that we Americans crave with a healthy spin on them. Generally, they are focused on giving these foods more protein as shown in their chips and their protein bars, but also they have a focus on diets such a keto as well.

Their philosophy is pretty straight forward: maximize the protein, minimize the carbohydrates and the sugar. They use complete dairy-based protein for a full amino acid profile and they use low calorie sweeteners in order to accomplish this.

The Quest Peanut Butter Cups are the closest healthier alternative peanut butter cup on the market that have a satisfying taste. Quest came really close to an actual peanut butter cup flavor with this product so I applaud them for that.

That said, I still prefer more peanut butter in my cups and the peanut butter they did use felt a little dry to me. The level of sweetness is comparable to that of a normal Reese's Peanut Butter cup, however beware that this is achieved through sucralose and erythritol.

My favorite of the three snacks I have tried today are the Quest Gooey Caramel with Peanuts bars. The flavor to me comes close to one of those old salted nut bars you see in gas stations nowadays. The bar is essentially chocolate covered nuts with caramel in the middle. I normally do not crave caramel, but this bar has the perfect amount of chocolate and caramel for me - and it is not too sweet either!

As far as the ingredients goes, it is a similar story to that of the Quest Peanut Butter Cups: too many sweeteners and bad oils. This bar uses palm kernel oil and multiple alternative sweeteners, one of which is sucralose which is an artificial sweetener.

I will say out of all of these bars, the Fudgey Brownie with Almonds was the most interesting. The Fudgey Brownie really has a lot going on, if you can't tell by the name. There's a softer brownie portion in the middle which is covered in a small amount of caramel, and then nuts on the outside of that all of which is enclosed in chocolate.

Overall, I enjoyed the taste of the bar. However, there were times where I felt like my taste buds couldn't agree on a unified taste of the bar and instead I was tasting separate components of it. One second it was brownie, the next second I was crunching on almonds. Overall, I did like the taste despite the weird experience.

The ingredients unfortunately write the same story as the previous two products: bad oils and I am not a fan of the combination of sweeteners used. That said, the Quest Candy bits versions of these products are a really nice portion size if you are looking for an after meal dessert.

A once in a while dessert.

Quest succeeded in "meeting in the middle" between candy and protein bar. I would not call this candy because these bars have a low glycemic index, but I would not call these bars healthy either as they use too many controversial ingredients. Also, the protein count is not that high. You could achieve similar results with various types of food such as cheeses, nuts or seeds.

Before I go, I want to explain a little bit about the ingredients that may be confusing to readers and my general view of them. Note that I am not a nutritionist and many studies on food are controversial. That said, some ingredients tend to attract a lot more controversy than others, such as artificial sweeteners.

Whey Protein Isolate is a fantastic protein that has a complete amino acid profile. The addition of this protein to the bar is what boosts the amount of protein in these bars at a low calorie cost.

Approximately 80% casein protein and 20% whey protein. Milk Protein Isolate has a complete amino acid profile for muscle recovery. This type of protein is in fresh milk, there is just no lactose. Quest uses this in combination with the Whey Protein Isolate to give you a good blend of casein protein and whey protein. Casein will release slower and is better taken at night or before periods where you will not eat.

A sweetener that contains nearly no calories that tastes like our common refined sugar. It does not spike blood sugar and possibly reduces risk of heart disease. Human studies show little side effects other than minor digestive issues in some people at larger doses.

An emulsifier that is sourced from hydrated sunflower gum. Sunflower Lecithin studies show that it can lower cholesterol levels and improve digestive health.

A healthier food additive derived from casein protein, which makes this ingredient not vegan. This additive increases the amount of protein in the bars and adds texture as well.

Soluble Corn Fiber is a fiber sourced from corn. Due to this, this raises concerns for some people since this ingredient is linked to GMO's. This ingredient may also cause digestive issues when consumed in the amounts that are in these bars. That being said, soluble corn fiber by itself has proven to have a good glucose response.

A flavor that has been extracted from a plant or an animal. This can include a large array of foods. Quoting the FDA, this can be a spice, fruit or fruit juice, vegetable or vegetable juice, edible yeast, herb, bark, bud, root, leaf or similar plant material, meat, fish, poultry, eggs, dairy products, or fermentation products thereof. Basically, we cannot tell just from reading the label what is in this.

A food additive used to thicken, emulsify and/or preserve foods. Carrageenan has shown in numerous studies that it may cause bloating, irritable bowel syndrome, glucose intolerance, colon cancer and food allergies. Healthline has a great article about this ingredient.

A zero-calorie artificial sweetener made from a long chemical processes that is 400-700 times sweeter than sugar. It doesn't have a bitter aftertaste like other sweeteners do which is why it still finds meddles its way into our foods today. As claimed this publication there is no clinical proof that these type of sweeteners are leading to weight gain, but there is an obvious association with between artificially-sweetened beverage consumption and weight gain in children. Another study shows its likely the sweetener kills healthy gut bacteria.

An oil derived from the kernel or seed of the fruit in oil palms. This oil is high in saturated fat and also has conflicting studies around whether or not it is healthy for the heart. Also, the methods of which this oil is obtained generally impacts the environment in destructive ways.

After reviewing numerous Quest products and also consuming Quest products occasionally for many years, I've noticed Quest has become more comfortable in using sketchy ingredients in their products. They started with using large amounts of fiber and a little bit of natural sweeteners, and they moved to occasional artificial sweeteners. Now, they're using all of these ingredients in seemingly everything they create. Palm kernel oil, carrageegan, sucralose and more.

Always be careful of what you put in your body and always read the ingredients of any prepackaged food you consume. I personally do not mind eating these types of foods occasionally, but be extra careful around companies such as Quest that promote healthy eating yet put many controversial ingredients in a single package.